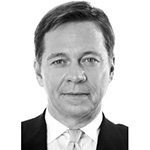 In addition, Brian has served as a board member of the American Association of Advertising Agencies and the NARB. Brian attended the University of Missouri, receiving a Bachelor of Journalism and an MA in Advertising.